"The still point of a turning world" 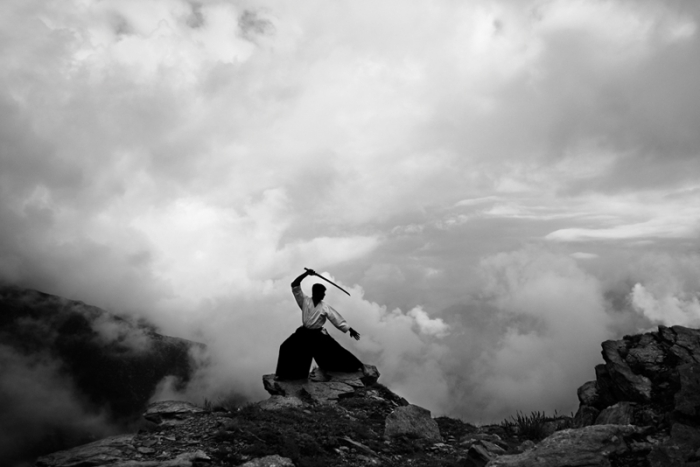 "The still point of the turning world" meaning the mind in this alert state is a mind at meditation. The mind at meditation is no longer a conditioned mind. The martial artist has achieved ultimate balance within and is one with his surroundings.

This image was photographed at 14000ft above sea level in the Himalayas. Home to the highest peaks in the world, the Himalayas have narrow roads and straight edged cliffs, which are engulfed by the clouds. Parked on the edge of a similar surrounding, I sipped on my piping hot tea, which froze within minutes. My fellow student agreed to pose bare feet for my shot on the edge of a cliff, from where we could see the frozen river Beas. While shooting for my book â€œThe Best Swordâ€ which is based on the spirituality of martial arts, my fellow students had to actually practice â€œNo Mindâ€ which means learning to be still. Without this practice, it would have been difficult to achieve this image due to the nature of shoot and the locations. I also had an assistant who would run to the Artist and cover him, till the next shot. After seven photographs, we realized that Martial Artist did not require the assistant. It was almost like he was one with his surroundings and the icy rocks didnâ€™t seem to matter anymore. He moved gracefully from one pose to another, and needed no further instructions for the script. It was a rare opportunity to have felt that kind of connection with my subject where, the world had indeed become still for both of us.