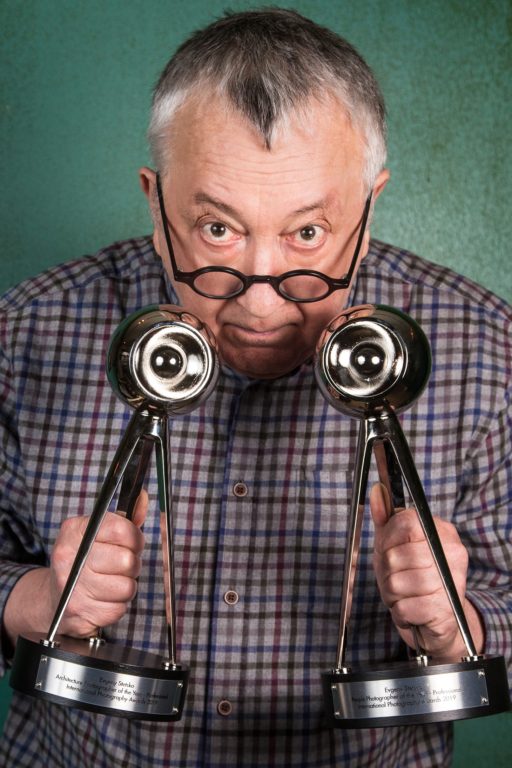 WINNER, PEOPLE PHOTOGRAPHER OF THE YEAR, 2019

Q: Evgeny, your background in photography is quite impressive and adventurous. You worked as a photojournalist, doing projects among others in North Korea, Afghanistan, Iraq and the Antarctica. You exceled in documentary photography and were even awarded at the World Press Photo competition. However, your winning project at IPA was something radically different. “Children’s playgrounds” is a wonderful collection of drone shots from above the colorful playgrounds found in Moscow. Where did this idea come from? It seems like a huge break from the work you’ve done before.

A: The surgeon who operated me for lung cancer said, “After this, lead your life exactly the same way as you did before. You dragged heavy bags – drag heavy bags, you took pictures – take pictures. Don’t feel sorry for yourself”. I understood. To complicate my life, I bought a quadrocopter and began to learn to fly. In the courtyard of our house a new playground was built. I have shot some pics just for training exercises. But I found them interesting. I began to look around Moscow for ones that were as new and bright, but a little bit different. This is how the idea for the series was born.

Q: How did people react to you taking drone pictures in playgrounds? Did you have to explain yourself? Or did you go there at times when they were empty?

A: I didn’t have to explain what I was doing. But once I have heard a middle-aged woman saying to her husband, “look at him, what a bum.” I was shooting in the early morning for two reasons. On the one hand, empty playgrounds looked more mysterious and decorative. And also, I could play with form. On the other hand, I was inexperienced and was afraid that the quadcopter might pose a risk to children if it broke down.

Q: The images are abstract worlds of vivid colors, resembling paintings. Is this part of a bigger shift in your photography style? A move away from the realistic documentation or the harsh world out there?

A: Yes, partly, but there’s more to it. Shooting with a quadrocopter opened up new opportunities for me in industrial photography, which I have been doing recently. And not only industrial photography. Last year I have done a big project on the Baskunchak saltlake, also with a quadrocopter. This place is in more than 1000 kilometers away from Moscow. Shooting, in terms of imagery, abstraction, and emotional expressiveness, echoes Playgrounds. But, of course, this is absolutely a different level.

Q: What does this recognition from IPA mean to you?

A: That moment I really felt that everything in my life has started to be going well. And a recognition is important and necessary, but small part of our profession.

Q: You graduated from the Moscow State University in photography and journalism. What drew you to that career, why did you decide to study this field?

Q: Out of all your projects, the work with the gymnastics champion Dmitry Belozerchev stood out for me, because it influenced your life later. He almost had his dreams crashed after a serious injury, but he fought like a tiger, came back and became a Olympic Gold Medalist. When you were diagnosed with lung cancer in 2018, did you draw inspiration and strength from this story? How are you doing now and what did this experience teach you?

A: I have huge respect for Dmitry Belozerchev, he’s really my hero. But I can’t say that I drew strength directly out his story. To be precise, I drew motivation from a creative idea, and that’s why I had to gather all my strength to make each next picture because it was interesting to me professionally as a photographer. I was really turned on and got inspired! I decided to take pictures of every stage of my treatment. And I perceived my idea as a serious project, not a photo report for friends in the social network. I felt my being in hospital was a job, not passive staying in bed. I asked permission to shoot at the hospital, and they let me, which is not exactly their policy. The first stage was chemotherapy. The doctor, explaining to me what was coming, said: “unfortunately, the hair will fall out.” “That’s great!” – I exclaimed. She was very surprised. “Spectacular for shooting” – I say. She looked at me like I was a complete idiot. And now we are great friends. In general, I became quite a popular person, moving from one stage of treatment to another with a camera and equipment. Of course, I photographed nurses and female doctors. I don’t think they received such gifts from anyone. To remember Dmitry Belozerchev again, I have to say, that when I was shooting him that time, I only tried to imagine how hard it was for him. And now I was inside a similar story. Or worse.

I feel really well now. What did this experience teach me? It taught me to take selfies :))

Q: What are you working on right now and what plans do you have (both personal and photographic) for the future?

A: Right now, I’m finishing up my very large project, which includes an exhibition that has already taken place, and a book that is due to be published soon. The theme is the construction of a large modern power plant in Chechnya on the site of the former one, which was bombed by Russian military forces during the Chechen wars. I started shooting in 2014, when the former station was still in ruins. Many people called it Stalingrad. Then I flew to Chechnya several times during short breaks in treatment in a cancer hospital. No one knew of course about my circumstances. Now it is a beautiful building that is necessary for a better life for all the people of Chechnya. I am completely engrossed in this work. That is the only reason for positive feelings now. Well, and some more else, of course. As for my plans for the future, I have some, but they are preserved until better times.