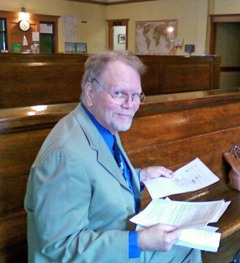 John Wood received the 2009 Gold Deutscher Fotobuchpreis for his collection of poems
Endurance and Suffering, as well as the Iowa Poetry Prize of the University of Iowa Press twice, for In Primary Light (1993) and The Gates of the Elect Kingdom (1996). His Selected Poems 1968-1998 was published in 1999. He holds a Ph.D. in 18th Century English literature, founded McNeese University’s MFA Program in creative writing, directed it for twenty-five years, and held professorship in both English Literature and Photographic History.

He is a well-known photographic critic whose books on Romanticism and photography, the daguerreotype, the invention of color photography, and other photographic subjects have won a variety of awards including being named to the “Outstanding Academic Books of the Year” by the American Library Association, Wall Street Journal’s Year’s Best Books, and the American Photographic Historical Society’s Outstanding Book of the Year.  He has published and edited over thirty books and written the introductions to more than twenty others on photographers as diverse as Joel-Peter Witkin, Sally Mann, Masao Yamamoto, Jan Saudek, Arthur Tress, Luis Gonzáles Palma, Mitch Dobrowner, Flor Garduño, Eikoh Hosoe, Michael Kenna, Connie Imboden, John Dugdale, Robert ParkeHarrison, and others.

He has also written the texts for more than ten catalogues of art and photographic exhibitions in the United States, Italy, Germany, Greece, Japan, and Mexico.  He co-curated the 1995 Smithsonian Institution/ National Museum of American Art exhibition Secrets of the Dark Chamber, and the book based on the exhibition was a New York Times Book Review Best Books of 1995.  The Los Angeles Times called his writing “surprisingly wonderful, witty, thoroughly researched, drawing boldly original revisionist conclusions, [and] systematically dismantling many of the myths surrounding photography and its history.”  And the Chicago Tribune called his work “a bracing corrective to some of the excesses in the Stieglitz legend.”

Wood is the editor and co-founder of 21st Editions, as well as the co-editor of the German fine arts press Edition Galerie Vevais.