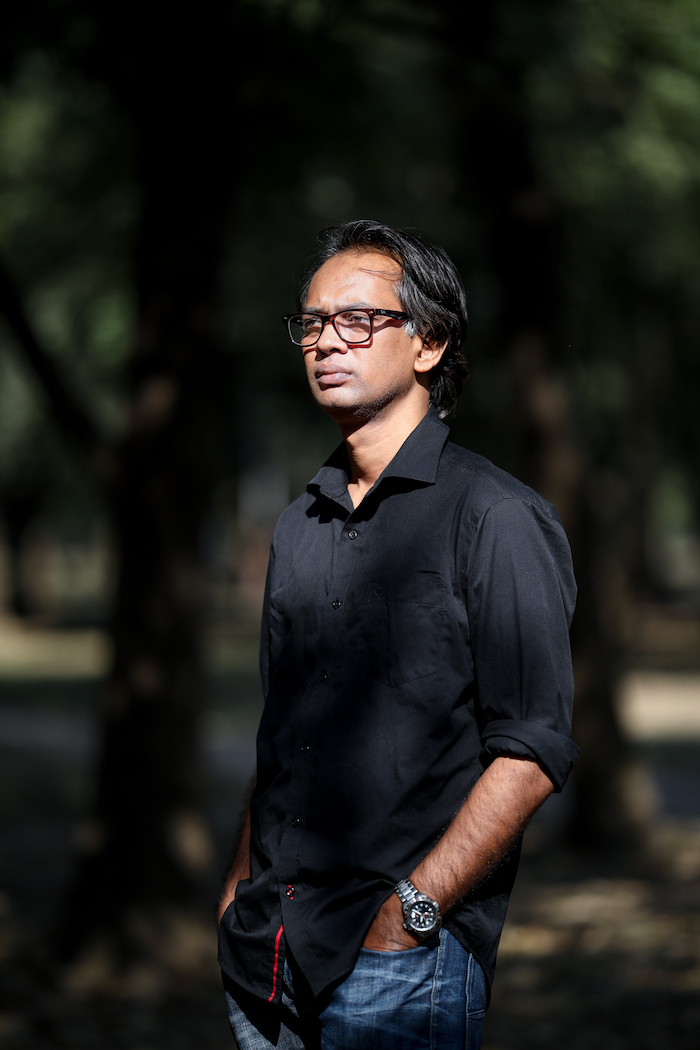 Mohammad Rakibul Hasan doesn’t just aim for good photos — he wants his work tobring a measure of peace to society.

Originally trained as a filmmaker, Hasan saw how crucial a still frame is in nation building, and he never looked back since. Hasan provides us front-row, up-close views that would otherwise be inaccessible. He is our eyes and, sometimes, our conscience.

Tell us the story behind your winning IPA entry, “I am Rohingya”, from the inception to the final touches.

The photo story “I am Rohingya” was my winning entry to IPA, earning me the Discovery of the Year award. The story was about ethnic cleansing of the Rohingya community, who lived in Myanmar for centuries, but due to racial categorization by their government, these unfortunate people were victimized several times throughout history, and finally, one million people had to migrate to Bangladesh to save their lives as there was a genocide going on. I have been covering this story since 2017 when the exodus began. I witnessed the mass migration of Rohingya people seeking shelter in Bangladesh as refugees. Most of the people came here barefoot, empty-handed and many carrying their elderly mother or father or relatives on their back as those people could not walk hundreds of miles on foot. Their journey was the toughest one as many of them had to climb mountains and many had to catch boats; many died on the spot by bullets from the guns of the Myanmar Army during their escape. Then, I regularly covered how they coped with a new life in the refugee camps.

How was your personal experience while covering the exile? Was there anything specially memorable?

During my stay at the Myanmar-Bangladesh border, I was observing this great exile of our time. I was remembering the black and white photographs of Magnum photographer, Raghu Rai, who captured Bangladeshi refugees, seeking shelter in India during the Bangladesh-Pakistan war of liberation in 1971. It was then I decided that the primary photographs of my story would be in black and white, considering the past tradition, so that I could reflect on the essence of intense human condition. I still can remember many incidences: once I was wandering in a crowded place where many Rohingya refugees had just started making their makeshift camps. I walked down to an old woman named Nurjahan Begum who was more than ninety years old and traveled five days to enter into Bangladesh from Buthidaung, Myanmar, due to the emergence of ethnic cleansing in her village. I asked how she was feeling. She replied that she was having fever. I always keep medicines while I go for shooting. So, I gave her the medicine and a bottle of water. She kept looking at me and asked where she could possibly get medical facility around this temporary refugee camps. I imagined what would have I done if I were in her position.

How powerful do you think visual images are as a force for change?

The world has witnessed the Rohingya refugee crisis and the exodus following the tragedy through the images captured by journalists. People were made aware of the terrific event by watching the horrendous activities of the Myanmar Army and their government. Many aid agencies took instant initiative to send aid to the refugees after coming across the visual news. Photography is undoubtedly a powerful medium of delivering messages. Pulitzer Prize winning photographer, Nick Ut, helped to reduce the horror of the war in Vietnam by capturing the picture of Kim Puch. Images can play a more robust role than ever before as technology has made it easy to spread an image from a remote part of the world to the other parts. The more an image gets published and viewed by the audience, the more it creates an impact on society and lawmakers to take quick decisions.

Now, take us back to the time you first held a camera and the moment you realized your passion for photography.

I am a sensitive person. I sense the world with huge possibilities. It is picturesque, a canvas in which we all participate, and everyone has a different role to play. Everyone has his/her own story. Each story is conjoined with that of others. We live in a geographical territory that is a backdrop of our lives. I came into photography while I was studying filmmaking at the University of Sydney. I had an assignment to tell a story with photographs. I was passing by the Sydney Opera House then, and suddenly, I discovered that there was a form of ongoing activity carried by activists at the sail of the Opera; it was actually an anti-war protest. I took the photo with a film camera, and then I scanned it digitally. Later, I lost the original negative of the picture. Two activists, Dr. Will Saunders and David Burgess, were convicted for painting the words “NO WAR” and were sentenced to nine-months periodic detention with a penalty amounting to $151,000 for the damage to the Opera House Trust. I later realized how a picture can be so powerful and vivid as it spread through the media and other mediums. I finally became a full-time photographer instead of being a full-time filmmaker. If I cannot emphasize and give meaning to a single still picture, how will I create a series of motion stills? However, I now practice both still and motion video for my clients and for my personal interest.

Tell us about the pivotal moment that really launched your photography career.

After completion of my film school, I decided to be a photographer. I started travelling throughout my homeland Bangladesh. Whatever I saw that was interesting, I took pictures of it. Later, I was granted a full scholarship from the World Press Photo to study a Postgraduate Diploma in Photojournalism at Ateneo de Manila University. Then I joined a Certificate program in History of Art at Oxford University. I am currently pursuing an MA in Photography at Falmouth University via a distance-learning program. These academic programs enriched my visual literacy and provided me with groundbreaking theoretical and practical ideas, professionalism and skill, to practice photography in a more pragmatic way.

What’s been the most volatile situation you’ve shot? Tell us about it.

In 2014, the opposition parties in Bangladesh were still on the street to fight for a new election under a caretaker government. They had been continuously calling strikes and blockades throughout the pre and post election period. Petrol bombs, cocktail and flammable substances were regularly thrown on public buses, trains and other vehicles. Innocent people were getting injured or killed during those attacks. The political parties were yet to take any responsibilities of the subversive activities against the innocents. I regularly visited those wounded and burn victims in the hospitals to shoot their pictures. It was a terrible traumatic situation I had to encounter during my visit. Many of them died, and I had to see the dead bodies and to hear the sound of tears of relatives of those victims. Then, I covered the Nepal earthquake in 2015 in which over ten thousand people died. I was then questioning myself and wanted to know the reason behind nature being so cruel. There was actually no answer. The presence of God and the functionality of the religions became a matter of question to me.

Talking to strangers, especially those in a vulnerable position can be difficult for some photographers. How do you manage to connect with subjects?

In several situations, I had to contact with the victims just by body gestures and facial expressions. When there is conflict occurring at a place, I don’t need to talk to anyone. But when it becomes calm and victims have no one around themselves, it gets very difficult to bother them by asking questions. Being a photojournalist, I try to wait for the best time to speak to my subjects.

When shooting a conflict, do you find yourself picking one side over the other or can you remain neutral?

I witness things, events, and experiences from a neutral position. I cannot choose any side. I just move with the flow of the event. Immediate analysis sometimes can help me choose what to do if there are victims in need of support to save their lives.

When you go to one of your assignments, what are your packing essentials?

Before I go to an assignment, I always check my gear and its workability. I keep a number of things in my camera bag such as rain protector, hard drive, mini laptop, medicine, notebook, pen, and blower. Most importantly, I always keep my mobile phone and a power bank with me. I also take photos with my mobile–this allows me to post important photos to social media depending on the context I am assigned for shooting.

In the field, what are your camera settings?

I take pictures with aperture priority and shutter priority. I instantly can decide after taking one or two pictures whether it requires altering of the exposure or not.

What kind of tools do you use for post-processing? Explain your workflow.

I use Photoshop CC and some plug-ins such as Nik collection. I always maintain an ethical standard of post-processing for photojournalism.

How’s winning IPA Discovery of the Year going so far?

It is a great achievement for my project “I am Rohingya” as it is now widely viewed by the audience. This recognition will allow me to work more confidently towards visual journalism.

What have you learned in documentary photography?

One thing I learned is the fact that I have a great passion for visual art and photography, and it is the most intriguing career that can provide me a relief from conventional jobs. It also gives me the sense of realization that I will be able to bring peace to society at least to some extent.