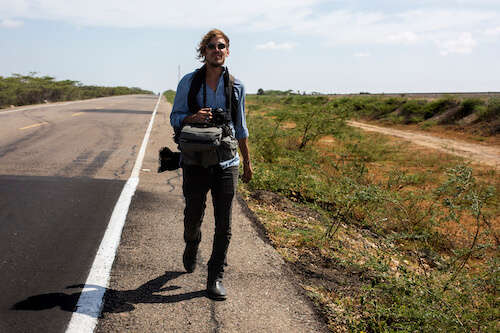 Q: Tell us a bit of your background!

After studying Literature at a university in Italy, I decided to travel to Latin America for a few years. A sense of freedom and adventure moved me. During those travels in Mexico, Central America, and Colombia, I also became aware of the injustices suffered by the indigenous communities, the endemic poverty, and the violence of those societies, and a sense of responsibility grew over the years. I understood that I wanted to tell the stories of the people I had met.

Q: When was the moment you realized you wanted to pursue photography professionally?

In 2011 I lived for three months in an indigenous community in Putumayo, a Colombian department in the Amazon basin, which is now my base in Colombia. I took my first photographs documenting moments of daily life and the healing rituals they perform in sacred ceremonies.

The Italian blog of National Geographic published some of those photos a few months later. I had applied for a National Geographic grant for travel photography, which I didn’t get. However, they decided to publish. When I understood that what I had seen and lived was now public and that I was sharing those memories with an unknown audience, I felt a great emotion, and I thought that photography could have been a path to follow. A few years later, I decided to pursue it professionally and tell stories of underreported communities. Between 2015 and 2016, I traveled to La Guajira, a desertic peninsula in Northern Colombia, to document the life and death struggle of the native Wayuu against coal exploitation, malnutrition, and climate change. My path into photography started with that project, which I called Forgotten in Dust. I am still working on it.

Trying to tell that story, I have explored the difficulties of creating a long-form investigation and my vision. Solving problems related to access, difficult light, I started learning how to do this job. I learned how to focus in front of the pain of others and that I wanted to make good photography to contribute to fighting injustice.

Q: Who or what do you turn to when you are having trouble getting inspired?

I try to do something completely different from what I am doing. If I get stuck writing, translating thoughts into a sentence, I go for a walk. When I am in Putumayo, I cut wood with an ax or take a day or two to help my friends in their agricultural work. Then the ideas come back freely, unexpectedly.

Books help me a lot, too, because I see the complexity of feelings and situations simplified by the right words in a good novel. In photobooks, photographers often explain the essence of a large body of work in a few pages, and I use those examples to clarify my mind and frame my photographic work and the words.

I turn to friends and colleagues when it’s about editing a series of photos and when I am out in the field, maybe in a challenging environment, if I am unsure of the best move to make.

Q: What would you say is the hardest thing about your profession?

The challenge is to drive change. Sometimes a photographic body of work can transform the lives of the protagonists of a story or shake the viewers so that they want to contribute to a social or political transformation.

After seeing the photographs from the project Exodus, a few NGOs reached out to know more about my experience in the informal camps at the borders between Colombia and Venezuela. In one case, they could start medical brigades and educational programs to mitigate the families’ harsh living conditions.

I have learned that photographs could drive actions, and I photograph with that intention.

Q: To create your winning work, “Exodus”, you traveled alongside migrants escaping from Venezuela to Colombia for weeks. What can you say was the most notable moment during this journey?

In 2018 my mother came to Colombia to visit. However, I had to continue the work at the borders, and we decided to travel together. I work alone because that makes me free to relate directly to the people, but she was great following such an intense rhythm of work for many weeks in a row.
In La Guajira, a peninsula in Northern Colombia at the border with Venezuela, a young Venezuelan migrant called Luisana Arevalo had died in a tragic accident. She was 19-years-old. Her family had no money to travel to Colombia for the funeral. A local NGO paid for the expenses so that her brother and mother could travel and bury their relative in a private cemetery, also owned by the same organization.

While I was photographing, my mother and Luisana’s mother connected. The cultural and linguistical distances blurred, and they cried and hugged in a way just two mothers can do. That was a moment of grief and love, where we all felt connected as if we were a family, celebrating life and death simultaneously. One of those photographs is part of the series that received the International Photography Award in 2020.

There are plenty of anecdotes after so many years documenting migration. However, this one is exceptional for me because that day, besides the grief, it was clear that people connect through love.

Q: What was the most dangerous/ fearful moment you had during this time?

I try to avoid a dangerous situation. If I cannot, I make sure I have somebody I can rely on if things go wrong. Latin America is a violent and precarious environment. Access is difficult for photographers, and we have to stay alert and ready to step back and often wait until it’s safer for us to continue the work.

Q: What was the biggest lesson this experience taught you?

The biggest lesson, and the most incredible privilege of this profession, is to share crucial moments of somebody else’s life. Walking for a long time with migrants from different countries, I have learned how tragic it is to leave home forcibly and how important it is for a family to stay united. I admire the people I have photographed. I respect their dignity, courage, tenacity, and faith that a better future is possible.

Q: Why did you want to enter this particular photo series into the IPA?

I want to reach as large an audience as possible. I entered the competition because I knew that such an important recognition would have significantly exposed the story and the work. Moreover, being this a personal project, I could fund part of the expenses thanks to the money prize. When I knew the project had been awarded and that I could match the money prize with a donation of the same amount to a charity of my choice, I decided to contribute to a Colombian NGO that works on educational programs, through photography, with children and adolescents in Bogotà.

Q: What does winning this competition mean to you?

It is a great honor because It validates my choices to work on a story following my guts. I had started documenting the Venezuelan migration in Colombia on assignments. The time at my disposal was too short when I was working for magazines and newspapers. I felt I had to stay longer to know better the people I was photographing and translate their emotions and condition in photographs. I started spending weeks and then months in the border regions of Colombia and along the migration routes of the Andean mountains that connect the borders with the capital city Bogotà.
I also felt that black and white, avoiding the distraction of the color’s details, would have driven us to a universal reflection on migration worldwide. In a world of fast news that prefers color photography, that was a challenging choice.

This recognition also encouraged me to expand this project into broader documentation of the migrations in the Americas. Since then, I have worked on the migration routes in Central America, Mexico, and the United States.

Q: If you could do anything or go anywhere, what would your dream photography project be?

My dream is about transformation, which can be personal, mutual between the photographer and people photographed, and social and political. Photography is a form of protest. As people continue to suffer, as they continue to be victims of injustice, I continue to photograph them. Photography becomes pedagogical when it tells about the relationship between the photographer and the person in the picture, besides describing a moment. It somehow describes how they reacted to each other, and that’s why sometimes, through their photographs, we feel we know the photographer or the protagonist of an image. The message works then on several levels of understanding.  I am not interested in an aesthetic that the viewer can enjoy. I want a photo to represent a message of humanity and the viewers to be shaken and reflect on their condition, which is often of privilege for the international audience, or a reflection of their struggle when they belong to the same community photographed.

I dream that a series of photographs will touch the viewers on intimate reflections and lawmakers and NGOs on the urgency to resolve a conflict.

Q: What is next for you? Are you working on anything right now?

I am expanding the project Exodus. While I continue documenting the movement of migrants in all the American continent, I am also digging more and more into the causes of the migrations. I plan to document the political instability and violence in Central America and the routes and the deportations in and from South America and the United States.

Q: What would be your main piece of advice to photographers just starting out?

Stay humble. If you don’t, you won’t allow yourself to see and understand the world around you. Desire to make marvelous pictures. Study the work of others and practice, but most important, know and study yourself. Focus on the content consistently. Don’t follow fashions. The aesthetic has to drive a message, not being the message. Try to be technically sound, and what you are will come out. Photograph people with respect, and tell them why you must make that photograph. Follow a story because you are genuinely concerned about it, and look for authenticity in a scene and your life.