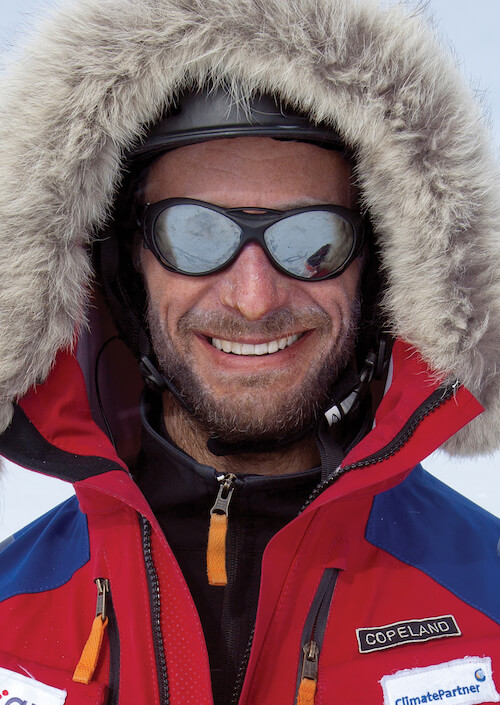 2020 Professional Book Photographer Of the Year

Q: Tell us a little bit about your background!

I was a lonely, introspective kid. I grew up with very little connection to my dad, and I found companionship in books, mostly adventure books, and running. I would shine in school with athletics. My grandparents lived in Swaziland, and by 12 years old, I went on my first safari in South Africa with a plastic Kodak point-and-shoot camera. I still have the photos (they are not good). And I loved diving into polar and mountain stories. Little did I know that sports, books and photography would shape and define my adult life. Today, the three pillars of my work are polar exploration, climate analysis and photography.

Q: When was the moment you realized you wanted to pursue photography professionally?

I did not choose photography, per se. It was more the other way around: photography chose me. I was, and remain, very curious about all things. I studied economics in highschool, and developed a deep interest in political science. In college, I could not decide between humanities and natural sciences. In the end, I chose two majors, and photography was a tool that allowed me to explore my creativity. I was a fan of film noir, and dramatic lighting with wide lenses. I got a 28mm and then a 24mm, and decided to shoot just with that. During college, I shot everything. I was incredulous when people asked me what style of photography I shot. I always say there are only two styles: good and bad. But it is the work that I did in college–replete with my nights spent in darkrooms–that got me noticed. I spurned higher studies for commercial work.

Q: Who or what do you turn to when you are having trouble getting inspired?

Books. When I went to college, there was no internet. So I went to public librairies. And I bought books whenever I could. I have a large collection of photo books. I always referenced other people’s work, but in the end my work never looked anything like it. That was not by choice! I wanted it to look like my heroes. But I never reached their level. Still, that was inspiration, and I guess it was good enough because I continued working!

Q: What would you say is the hardest thing about your profession?

To stand out. Today, especially, when photography is ubiquitous to society, it is less about having a style than having a voice. Good photography is expected, it’s a given, since algorithms are doing most of the work anyway. But a voice is the fruit of a focused attention on what makes it just that. And I would say that curiosity and empathy are a good place to start for getting there.

Q: Global warming is an increasingly large problem. How did you come up with the idea for your winning work, “Antarctica – The Walking Giant”?

In reference to the last question, my polar work was the natural progression of a lifetime of dreaming and searching. I burnt out early with commercial work. I could not relate to a lot of the work that I was getting, either because my people skills were not good enough to get me to bend the work to an arc that was my own, or because I did not see the more creative teams. Either way, I cultivated a childhood dream of becoming an explorer. Not knowing how to go about it, I simply went on adventures of my own. I love everything about the ocean, and spent weeks sleeping in my truck at the edge of Central American surf breaks. But from my courses in geology and glaciology, I kept an affinity for Nature, and when I was exposed to the concept of climate change in the mid-1990’s, I realized that my time doing commercial work was drawing to an end. I had an opportunity to spend two seasons on a scientific research icebreaker in Antarctica, and I never looked back. Luckily for me then, I did not have a family.

Q: How did you get into this particular genre of photography?

Nature, at its purest, shoots itself. And the polar regions are a point and shoot environment. But like any exotic locations, you hone in your voice the more time you spend in that environment. At first, you shoot everything. But looking back at the early days, you can see how things begin to align differently. You are not in control of weather conditions anywhere, but this is especially challenging in the polar regions. Ice looks best in overcast, and even dark settings. And luckily, the weather at the poles is often overcast, drawing blues and greens that are subtleties of the ice. But in the end, landscape photography is determined by the time you get to spend in front of your subject. Organized trips do not allow for a lot of autonomy. So I opted to control the itinerary by going at it alone, or at least by controlling the narrative.

Thankfully, it played right into my aspirations to become an explorer. And that is exactly what I did in my mid thirties. But it was a lifetime in the making. Had climate change not been so resonant for me, I don’t believe I would have committed all of my energies to that environment for the last twenty-plus years.

Q: What was the most adventurous, adrenaline-filled moment for you in your work?

A long North Pole mission is without a doubt the most challenging of any expedition. It is confronting, and debilitating. It is nothing but pain. But what it gives back is commensurate with that level of difficulty. Besides, it changes you. Like many polar “expedition” (as opposed to a trip or a voyage), the benefits come mostly after you are back. Photography–and now motion pictures–is the proof, the reward. It is an incredible privilege to be out there, but to bring back imagery that gets other viewers to visualize what you have seen is the greatest gift of all. With that said, it is a gift that I personally relish, as it takes me back. So the pain of shooting is in fact the gift that keeps on giving.

Q: Why did you want to enter this particular photo book into the IPA?

My entry was a series of images from my latest book, ANTARCTICA: THE WAKING GIANT (Rizzoli 2020). The book represents many trips on and around the southern ice, notably a 4100km crossing of the continent from East to West on skis and kites. Having spent a good deal of time in the coastal peninsula as well, I felt that this book could give a fuller glimpse at Antarctica. Not just the penguins, seals and whales, but also the heart of the ice, the least travelled region on Earth. Turning the pages takes me there, and I wanted to give that feeling to viewers that will never trek there. The texts go into the history of exploration, and the role Antarctica plays in the geopolitical balance of the planet, from a climate perspective. Having Leonardo DiCaprio provide the beautifully worded introduction was the cherry on the cake.

Q: What does winning this competition mean to you?

IPA is the gold standard of photo competitions. To have the approval of your peers, is the penultimate validation. It does not change much else in your life, but it confirms that you’re on the right track, and what you did was a job well done!

Q: Do you take photos in other genres as well?

Again, I feel that in photography, as with music, painting and other art forms, there are only two genres: good and bad. And so, I try to shoot “good”! I shoot what inspires me. Nature is a constant muse. But I have kids, and they are always a source of inspiration: natural or staged, they are a playground and a test of my own patience! I have shot a lot of fashion and some nudes. So it really reflects what is in front of me. But in the end, you have to specialize. And the photography that I show has to carry a message. A commentary on the state of our world. I appreciate other people’s work accordingly. Julia Fullerton-Batten’s winning entry was exceptional in that respect. That work was deep and captured with style our collective COVID angst. Beautiful.

Q: If you could do anything or go anywhere, what would your dream photography project be?

Well that’s easy: my moonshot would be the moon. Or Mars. I connect with deserts; spaces that are largely existing outside of the human imprint. I grew up looking at those Hasselblad shots of the moon. In that monochromatic environment, what today’ s color spectrum photography would extract is something that keeps me dreaming. And bringing a new aesthetic to this other point-and-shoot location.

Q: What is next for you, are you working on anything right now?

I have no shortage of projects, and I am really looking forward to getting away from all the COVID travel restrictions, so that we can implement them. There are large scale exhibitions, and remote expeditions. But in the short term I will be scaling Kilimanjaro in a few weeks, and hope to shoot large format at the top of the mountain (if I make it there!). And I should be on the Antarctic ice in December; Greenland in the spring. Then I have a few gallery exhibitions into the middle of 2022, and I will be releasing a book in fall 2022, focused on a behind-the-scenes of polar travel; so more the grit than the beauty this time. Also with Rizzoli Publishing. Finally, I am editing a film of my long Antarctica crossing which I hope to release about the same time.

Q: What would be your main piece of advice to photographers just starting out?

To quote the commencement speech that Kurt Vonnegut never gave: wear sunscreen! Seriously, the benchmarks of success are the same in all areas of photography, and the challenges remain the same: how to capitalize on each opportunity; how to be visible but remain credible; how to be compelling to invite opportunity; how to market yourself. Like all passion projects, this is a marathon, not a race. But by staying legitimate over the long haul, and committing to the high road, the cream should eventually rise to the top!

Keep your head up, stay curious, focused, travel and work hard but don’t be hard on yourself. It’s a long journey and you will be on it until the end. So make sure to make friends with yourself. You won’t know your voice until it taps you on the shoulder when you least expect it, so shoot everything! Picasso once said that a painter should visit a gallery everyday, because good or bad, other people’s work is always edifying. I think that also applies to photography.