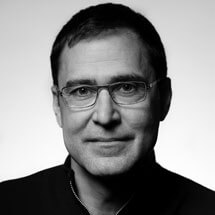 Todd James is a Senior Photo Editor for National Geographic magazine, the journal of the National Geographic Society, with a monthly readership of nearly 40 million people worldwide. Since joining the magazine staff in 1996, he has produced and edited numerous award-winning stories spanning the globe from the Galapagos archipelago to the Saudi Arabian desert. Frequently, the science stories he edits inform the ongoing debate over public policy, such as his cover stories on Darwin in the classroom, stem cells and surveillance technology and privacy.

James’ career in journalism began as a newspaper photographer for the Daily Oklahoman, following his freshman year at the University of Oklahoma. After further study at the University of Missouri in 1981, he moved to New York City and began working as a freelance magazine photographer before joining Fortune magazine as a photo editor in 1988. Prior to becoming an editor at National Geographic magazine he was a Senior Photo Editor at BusinessWeek.