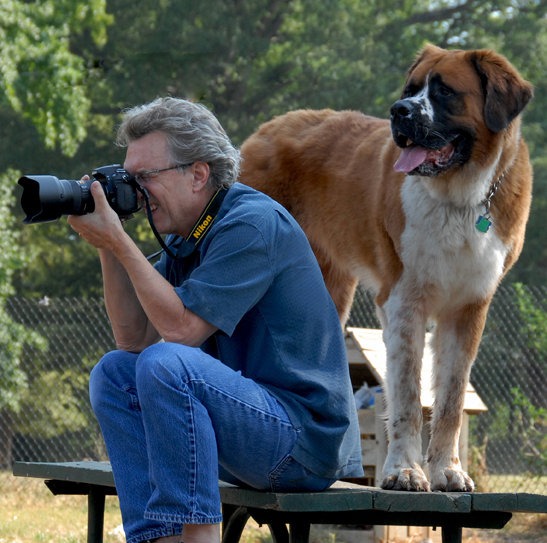 2015 SPECIAL PHOTOGRAPHER OF THE YEAR

I have received fellowships from the Virginia Museum of Fine Arts and the Virginia Commission for the Arts.  My photography is held in the collections of the National Museum of Photography, Bogotá, Colombia; California Sate Polytechnic University; Santa Barbara Museum of Art, CA; Santa Fe Museum of Art, NM; Sir Richard Branson, personal collection; and the Royal Caribbean Cruise Lines.  My work has been published in multiple publications and books. Entropic Kingdom, containing images from five series, was published by Modernbook Editions in 2012.  Galerie Vevais published Werkdruck No. 6 in 2015, featuring the Illumination series.

Over the years photography has expanded to include many different approaches and forms. I most identify with contemporary, fine art, color photography.

My work is constructed, or you could call it photomontage.  Either way it consists of building an image using separate elements (i.e., background, human figure, animal and various objects) and combining them digitally to look  convincing. The human figures are generally children who convey both vulnerability and strength.  In addition, I like to use an element of surprise or a bit of magic realism in my work.

My style or subject matter typically involves animals and children with a strong use of symbolism and magic realism.  I try to create images to look “possible but improbable”.  Although I continue to use the same subject matter, the look of my images changes some from series to series through the differing use of color and texture. Recently, I have added textures in the skies in my latest series about Iceland.  In other series I have used color, or the lack of color, as a unifying factor.

I will have to say it was a painting, not a photograph, that made a lasting impression.  My family is from southern Pennsylvania where my grandfather, an illustrator,  personally knew the NC Wyeth family.  I was lucky to see Andrew Wyeth’s Christina’s World in a local museum.  It’s one of those pieces of art that is difficult to take your eyes off of.  I loved that the color pallet, the composition, and the subject matter all worked together to form a masterpiece.

I have always had a camera and in art school took a heavy load of photo classes.  It wasn’t until Photoshop appeared in the late 80’s that I started to work with it and take photography more seriously.  I was working as a graphic designer when my business bought the first version of Adobe Photoshop.  As artists we experimented with Photoshop and pushed its limits to see what we could do.  I recall placing an eye in the middle of a forehead and removing unwanted relatives from friends’ Christmas photos.  More seriously, I started using vacation photos and introducing extra elements to the photos.  These were mostly images of the Southwest where I added horses, children, burning goats, etc…  Once I had enough images to constitute a series, I approached a gallery.

During the Vietnam War I was stationed on a Naval base.  I could see first hand that what I had been reading about in the papers back in the States was not true.  Things are not alway what they appear to be.  I would never again accept information as the being the truth without looking into it for myself.  Vietnam inspired me to think for myself.

What’s your most embarrassing moment?

Most of these I refuse to talk about publicly, but once in high school the recently appointed principal called me into his office to say hi.  He had taught my mother years before and wanted to see what I was like.  I was so nervous during our chat that when it came time to leave I shook his hand and then walked through a door and into his closet.

Since I don’t work on spec, my dream project would be having unlimited time to put together a series of images.  I would travel to a different country for inspiration and photo material for the series.  I would work on it in my studio while listening to Puccini’s La Boheme, drinking pinot noir and eating chocolate chip cookies.  Turkey and swiss cheese sandwiches would be delivered at my beckoning.  I don’t have a dog now but I would get one for my dream studio.

Typically I try to finish fifteen images for a series.  I work on two or three images at a time in order to keep things looking consistent.  If any particular image is not working for me or the series,  I drop the image from the series, but save the elements for another time or series.  Once I’m happy with fifteen images, I print them and tape them to a wall so I can see how they fit together.

The next photo I’m going to make is the one that makes me proud.  I have a number of images that have been successful in terms of popularity or sales.  Although these are strong images, once I finish an image I tend to move on and get excited about what I am planning to do next. It can be stressful for me if I don’t have a plan for the next step.  I like to think about the next series as I’m finishing up the current one.  Once a series is complete it takes some time to introduce it to the galleries or the public.  While I’m doing that, I start shooting for the next series.

My stereo system… got to have music!

I shoot photos for the creative outlet.  If I didn’t have my photo work I would be unfulfilled unless I was doing something else that required creativity.  It wouldn’t necessarily be art related, it could be building a structure or a boat.  I have a number of brothers who are wood craftsmen.

Brownie film camera (620 film?) which I had in grade school and then while in my twenties I owned a 35 mm Yashica film camera.  I used it during my hippie hitchhiking days mostly shooting landscapes.  I still have the slides although they are deteriorating rapidly.

Different roles depending on the type of photographer.  As a fine art photographer I hope my work connects emotionally with the viewer and then inspires the viewer to take a new and different look at the everyday objects or more significant issues.

You can contact Tom and find his work here.